It’s amazing how he can still flip the golf world upside down with this news release, and rightfully so.  He’s the greatest golfer of our era, and arguably of all time.  He is without a doubt the most exciting, and has transformed the way we play the game more than anyone in history.  Bringing an athletic approach to a game that was once considered to be for overweight bowler type individuals that couldn’t play a “real sport”, as viewed by sports fanatics that mainly follow baseball, basketball, and football, and don’t know the first thing about the complexity and difficulty of our beloved game.

So, he’s back!  Lets cherish what he’s given us and any and all he has left to offer.  The game is in great hands with all of the young guns coming up through the ranks trying to take the top spot and scratch the surface of what Tiger has accomplished.  There are a lot of critics saying he’ll never win again, and others that are criticizing his fellow competitors for talking trash.  I for one, love the trash talking.  We’ve seen the fire that has been lit in Tiger in the past from that.  Plus it’s exciting, and will draw more of the not so everyday fans in to the picture just to see what might happen.  If he never wins again, so what.  He’s done enough and won more than 99% of people that have played the game.  I’ll never vote against him.  He’s proven time and time again that he can do the impossible. 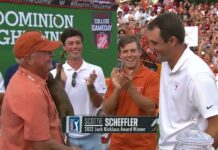 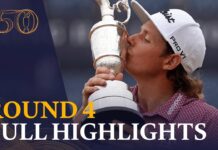 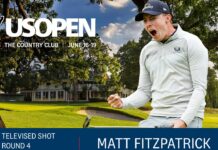 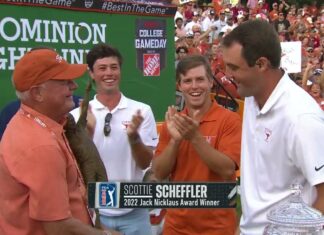 ABOUT US
Smokin Aces Golf is your golf news, entertainment, charity, and in general all things golf website. We provide you with the latest breaking news and videos straight from the golf world.
Contact us: info@smokinaces.golf
FOLLOW US
© Copyright - 2017 Smokin Aces Golf - (Global MAS Media, LLC)